Face to Face with God—Johnson 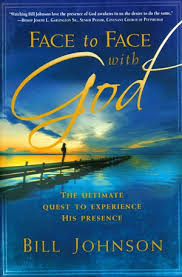 When I first picked up his book a couple years ago I knew nothing of Bill Johnson. I intended to preview Face to Face with God for our church library. The cover is beautiful. The tagline enticing: “The ultimate quest to experience His Presence”. Ever on the lookout for books that encourage the believer to grow in his knowledge of God, this one seemed promising.

Then I read the first chapter. In it Johnson defends his personal quest for ‘deep encounters with God’. He illustrates by describing his own electrifying experience of being wakened in the night with ‘power surges’ running through his limbs such that he had no control over them. No voices. No visions. Just a sense that this was God’s response to his prayer for ‘more of Him, at any cost’. He interpreted this experience (which returned for consecutive nights) as being ‘actually a face-to-face encounter with God’ and sensed God offering him ‘an increased manifestation of his presence in exchange for [his] dignity.’ (11)

This experience came as the culmination of Johnson’s travels in quest of more ‘power and anointing in his life’ to many cities where God seemed to be working in unusual ways. He went on from this experience to assume the pastorate of Bethel Church in Redding, California and precipitate a dramatic church split with no qualms of regret or questioning of God. A thousand congregants exited as ‘revival’ commenced. Johnson’s dreams and visions made God’s will and favor ‘too obvious to miss’. The year was 1996, the beginning of the Johnson era which is now percolating throughout the world via iBethel TV and ‘School of the Supernatural’ training courses, to even such remote locations as mine. Because of the ongoing attention given to this controversial figure I have dusted off my copy of the book and re-attempted to read beyond the first offsetting chapter in order to write a review.  Unfortunately,  Chapter One’s disconcerting emphasis on subjective experiential reality as the evidence of God’s favor and also the means of personal transformation continues throughout.

--God’s favor—how to get it, increase it, and pass it on;

--God’s manifest presence and how to position ourselves to experience it and even ‘attract’ it;

--Healing, as included in the atonement;

--The Joy of the Lord (and holy laughter);

--Reflecting the Glory of God

But the overriding theme of the book is the necessity to “lock into [God’s] manifest presence and live for nothing else”(60), an emphasis that calls into question whether we as believers are really called to live by faith or by tangible experiences? Is experiencing God’s ‘manifest presence’ in this lifetime truly our primary calling? There seems to be confusion over what a growing relationship with God is expected to look like, and an unhealthy emphasis on pursuing subjective encounters with God as the primary means to growth.

In handling his themes Johnson’s matter-of-fact writing style often gives flawed logic and rhetoric the place of sound exegesis of Scripture. Conjecture comes across as established fact. Biblically based objections are brushed aside as irrelevant. These factors make his book an unlikely read for the serious Bible student, while offering a potentially toxic mix to the undiscerning—toxic in its intolerant sectarian bent. Johnson’s inaccurate representation and even mockery of orthodox theological points-of-view that differ from his own is unfortunate. His use of snide aphorisms undermines his ability to communicate effectively with those who oppose him. For example: “Two thousand years ago all sickness was from the devil and healing was from God; today people teach that sickness is from God and those who pursue a healing ministry are from the devil (or out of balance, at best.)”(105) Confusing divisive misstatements such as these and the fluid mixture of truth and error on any given page make this a book I cannot recommend despite the scattered bits of wise insight.

However, it would be inaccurately disparaging to imply that Johnson’s entire book is about experiences, or that none of it is based on objective truth. To the contrary, Johnson does cite Scripture throughout and makes many valid points. For instance, he underlines the importance of such things as: seeking God’s approval rather than man’s, knowing God experientially--not just intellectually, and understanding and extending to the world God’s compassionate nature. Johnson is passionate about seeing the power and love of God transform lives.

Where he errs is in extrapolating from a verse or Scriptural illustration with the use of logic (often flawed) to reach a predetermined conclusion, rather than comparing Scripture with Scripture and confirming his suppositions from a careful exegesis of the whole counsel of God. His self-assured style of writing (similar to his speaking) gives an impression of absolute truth where in fact he is speaking from supposition, conjecture or opinion. His narrowly defined usage of terms like ‘the favor of God’, the ‘manifest presence’ and ‘passion’ give a subjective fogginess to his teaching.

Bill Johnson writing is reactionary. Herein lies his greatest vulnerability. He has obviously had many critics and refers repeatedly and disparagingly to ‘some people…’ In his frustration with anything that smacks of powerless religion (59) (or lacks external displays of the supernatural), Johnson voices a strong bias against theologians, Bible teachers, and those well versed and trained in Bible study, likening them to the Pharisees who alone received Jesus harsh judgment. “The ones most trained in Scripture were the ones who didn’t recognize Him for who He was” and claiming it is those aware of personal need that will be enabled to “recognize that which God is doing in the earth.” (112) Johnson sharply condemns ‘self-appointed watchdogs’ who are ‘slandering some of God’s best friends’ (those with ‘signs’ accompanying their ministry). He faults those who want to be ‘doctrinally safe’ at the expense of ‘relationally safe’ and foresees a desirable move away from churches centered around good doctrine (denominationalism) to those gathered around ‘fathers’ (those exhibiting power). In separating power from sound doctrine in this way and calling criticism ‘slander’, Johnson cuts himself off from the part of the Body he most needs in order to grow soundly in Christ. He opens up himself and his followers to the likelihood of serious deception.

Ironically, it is Johnson’s unbalanced emphasis on the earthly ministry years of Christ, to the exclusion of the whole counsel of Scripture, that lead him into some of the most serious doctrinal errors. He teaches that Christ laid aside His deity and became entirely human as a role model for believers of all time to follow. This is the kenosis heresy that was battled in the early church. It is a subtle deception that leads to the assumption that Jesus’ life was primarily about being a role model and that whatever He did, every believer has a mandate to do also. As Johnson states: “Jesus Christ is perfect theology….He is the will of God.”(184) We need not pray “If it be Thy will” as though it were unclear. If we see it in the life of Christ it is God’s will for us today. If not,then it is not God’s will. Johnson specifically cites Jesus’ commissioning of the twelve to: ‘heal the sick, raise the dead, cast out demons, and cleanse lepers’ (Mt.10:8) as the job description of all believers—the ‘overflow of the face of God encounter’(107) What he neglects to emphasize is that the gospel is about Jesus’ death and resurrection. His miracles were specific evidence that He is indeed the Son of God (Jn.20:31), and are Biblically cited as evidence of His deity (Jn.10:38). Furthermore, God’s will for believers differs from one to another believer. We do not all have the same calling or gifting, nor will each individual relationship with the Father be accompanied by overt supernatural encounters with Him.

I submit to you this review in sincere intent to fulfill my part in the Body of Christ—to promote truth and point out error, for all our sakes.  I close with some of Bill Johnson’s own sayings for your consideration. With which do you agree? Can you find Biblical support? Which contain logical fallacies?

“There’s no clearer way (to Christlikeness) than through personal encounters with Him.”(70)

“…our commission [is] to imitate Christ in destroying the works of the devil and performing signs and wonders.”(30)

“Today it is accepted for leaders to teach that God brings calamity because He knows it will draw us nearer to him. If that line of thought were true, then mental hospitals and cancer wards would be glowing with God’s manifest presence as all their patients would have drawn near to God and been transformed into the likeness of Jesus.”(104)

“One of the most important features of the gospel message is that the nature of the Father is perfectly seen in Jesus Christ.”(106)

“What was the nature of God that Christ reveals?”(102)

“If we don’t know how to receive [honor] correctly, we will have no crown to throw at His feet.”(205)

“We tend to manifest his likeness in equal measure to how deep our encounters have been.”(219)

“Powerlessness demands an explanation or a solution. Blaming God seems to be easier than it is to take responsibility and pursue an encounter with Him that changes our capabilities in ministry.” (105)

“The absence of the supernatural is intolerable.”(84) “It’s never ok to live short of the miraculous… We owe Him (Jesus) miracles as a testimony that He is alive and that His face is turned toward us.”(189)

“Full repentance and transformation can only take place through real encounters with God—through actual experiences with His power and grace.”(72)

Until we ‘attain to the unity of the faith and of the knowledge of the Son of God, to mature manhood’…

Email ThisBlogThis!Share to TwitterShare to FacebookShare to Pinterest
Labels: Johnson--Face to Face with God, Non-fiction

Linda
I am a lover of God's Word and of His Creation, and most of all of the One revealed there. In words and pictures I share weekly the wonder of what I am seeing in hopes of inspiring others to love the One reflected here.